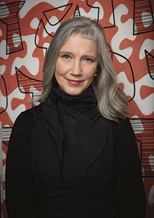 Dr. Alexandra Palmer, the ROM’s Nora E. Vaughan Senior Curator, Textiles & Fashion. Her award-winning book, Dior: A New Look, A New Enterprise is a resource that even archivists at the House of Dior’s headquarters in Paris refer to as their “bible”.

Released in December 2018, her latest book, Christian Dior: History and Modernity, 1947-1957, breaks new ground exploring the style, cut and feel of the Dior look – a look that, when it first appeared, revolutionized the entire Paris haute couture  industry coming out of the dark days of World War II, and laid the foundation for the House of Dior’s global success.